Chris Fitchew is the Creative Director of WONDERMENT GROUP LTD

Chris Fitchew is honoured to be asked to host the ‘Wider Horizons Noah’s Arc Open Mic Evening’ on Friday night, and bring his own show, JOYBOX, Wonderment’s joyous cabaret, on Saturday night.

Chris is known as Master of Ceremonies, Celebrant, Energetic Magician, Tribe Jester and Alchemist of Joy, having hosted and held space for many events, gatherings and happenings around the world. Including Wasinga, Wider Horizons, JOYBOX and of course, his own community; Wonderment, creating events in nature and for the Online Community.

Our compêre for the night, the delightful Chris Fitchew, is putting on Noah’s Ark Open-Mic Talent Show Extravaganza on Friday 19th June 2020 from 9pm at Wider Horizons Summer Solstice Gathering in Wonderland Festival Online. 🐿️ No experience necessary.  You are all invited to offer something, anything, everything is welcome! – a joke, song, poem, story, breathing exercise, prayer, Qi Gong movement, silly position – anything. It is an opportunity to show up and share yourself with our Wider Horizons Community. Fancy dress is gently encouraged.

So we invite all of you mellifluous beings to start practising, and prepare to share your talents with the wild animals of the Ark! ⛵

On the Wider Horizons Ark Stage

WONDERMENT’S JOYBOX features on the Wider Horizons Ark Stage at the online Wonderland Festival, with another line-up of magically talented performers from the world of comedy, stage, cabaret, dance, and circus. An action-packed show that has been the Facebook live must watch Friday night show since lockdown began 12 weeks ago. Our one & only aim is to boost everyone’s Oxytocin to the max during what we call ‘Lovedown’.

Starring the WONDERMENT FIRE SHOW with a live link up with fire performers from around the world, as well as JUDE ELLIOT & ALEX JUPITER joining us to wow us with their velvet vocals. Hosted by CHRIS FITCHEW we are also thrilled to welcome the absolutely hilarious MELLIE MOONSHINE & BRET with their hilarious internet sensation – GOALS. With some extra guests and interactive games thrown in. 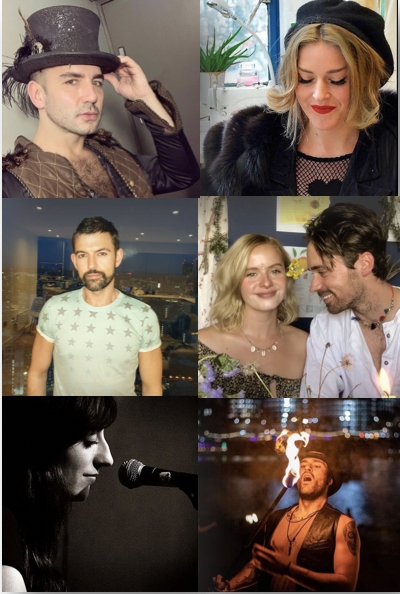