In her youthful breakdancing days Jimena was exposed to the harsh reality of youngsters living on the streets of Rio de Janeiro. Due to the emotional impact of this she felt a strong calling to empower the children and young people of Latin America and immediately began volunteering at shelters and soup kitchens around the continent, eventually becoming a founding leader of Action for Brazil’s Children Trust (ABC Trust). Having developed the capacity of 22 project partners in 5 major cities, ABC Trust became a founding partner of Street Child United, a global platform to voice the rights of young people at risk around the world.  After 20 years working in the community development and social justice sector, Jimena turned towards the emerging environmental crisis and focused on the protection of ecosystems. She actively campaigned for Ecocide Law alongside Polly Higgins and initiated the Fossil Free campaign in Sussex. Jimena continues to produce events to raise awareness and funds, as well as help establish networks for positive change.

A dynamic activist for transformation on the inner and outer worlds, Jimena has nurtured a keen interest in diverse healing and energy modalities. Becoming initiated into the Siddha Kundalini lineage, and Nature Mysticism of Andean Peru, whilst bridging Indigenous traditions of Amazonian Brazil as a Guardian of the Huni Kuin and the Yawanawa, she has established simple yet powerful ways to support the best and highest potential of herself and the diverse communities she is active in.

Learn tools for grounding, centring and deeply connecting to align yourself with your purpose and become a naturally attuned force for good.

Strengthen your energetic field and raise your frequency. Energise yourself and the field around you.

Anchor yourself as a stable axis in the turning world, whilst widening your energy channels, naturally and effortlessly beaming out light and healing. 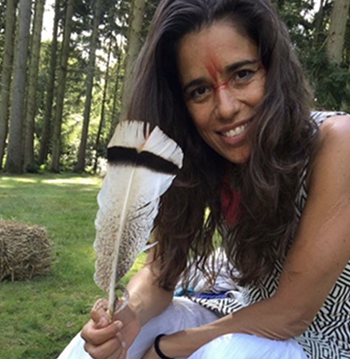