Following his time in the music business with the 80s band Scritti Politti Tom has developed a truly artistic way of living where every experience leads him to the humorous uncovering of some universal truth.

He turns his disasters and successes into stand-up comedy for conference audiences. 40 years onstage, first behind a drum kit then being the multi-talented front man for whole troupes of performers earned him the name ‘The Rhythmic Ringmaster’.

Instant Teamwork is both Tom’s speciality and the name of his company. Teambuilding, be it drumming or harmony singing is all very energising on the day but how do you make that bonded feeling sustainable. Tom has devoted the last 20 years to answering that question and he turns up with a customised set of tools he is passionate about sharing.

Fascinated by the creative process Tom is passionate about sharing what he’s learned about art, rhythm and harmony over the past 65 years. From playing kit drums with the Art School band Scritti Politti in his 20s, through songwriting in his 30s, to studying psychology and facilitation in his 40s, Tom eventually set up Instant Teamwork International in his 50s.

Equally at home challenging a global board of directors as he is when inspiring a local charity group, Tom has an experienced and humorous approach, which puts people at ease immediately.

His down-to-earth belief that people can achieve great things when they overcome their natural fears, has empowered thousands of individuals to work together effectively.

Tom’s style, developed working with teams as small as five to groups of five thousand during the last decade, ignites people’s curiosity. His own enjoyment of the creative process is an irresistible invitation for us to leave our comfort zones for a while and join him on his journey. And, of course, we expand our horizons on the way.

Preparation for full moon drumming and dancing around the fire 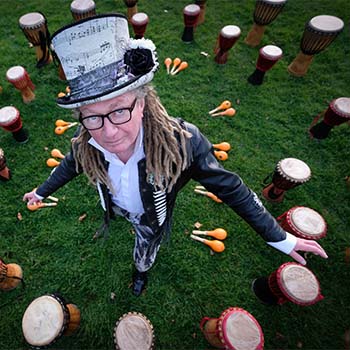